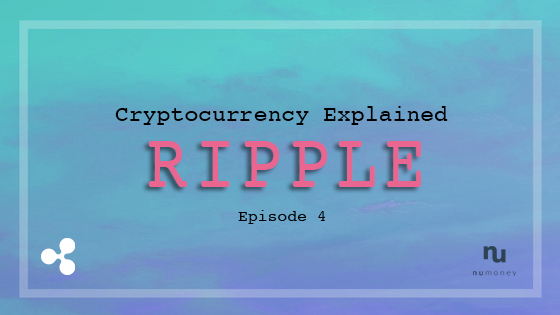 Ripple is both a digital currency like Bitcoin, Ethereum, Litecoin and is also an open payment network which facilitates the transactions. Unlike most cryptocurrencies which aim to decentralise the banking system, Ripple is the only working digital asset actively working with banks to improve rather than undermine their operations.

Ripple boasts the ability to process on average over 1,500 transactions per second, making it the fastest cryptocurrency on the market. Imagine you want to send money to your friend, who lives in Korea. Usually, you will have to do this at a bank, which will have to go through a few intermediaries, wasting time and increasing the risk. With Ripple working with banks, it allows your cross-border payment to be done within 5 to 10 seconds.

Back in 2004, Ripplepay was launched as a peer-to-peer payment system by Ryan Fugger, which serves as a financial service to provide secure payment options to members of an online community via a global network. Chris Larsen and Jed McCaleb took over the reins from Fugger and this led to the conception of a new system, developing digital currency system which transactions are verified by consensus among members of the network, unlike Bitcoin which relies on blockchain ledgers, co-founding the corporation OpenCoin.

Later in 2013, OpenCoin changed its name to Ripple Labs and it releases its source code for peer-to-peer node behind Ripple payment network. This meant that the community had the required tools needed to maintain Ripple network on its own. It was later rebranded to Ripple which you currently know of. Subsequently, more and more banks integrated Ripple into their payment system, with American Express (AMEX) as one of them.

There you have it, Ripple explained in under 5mins. As always, before deciding to invest in anything, do research more before finalising your decision.