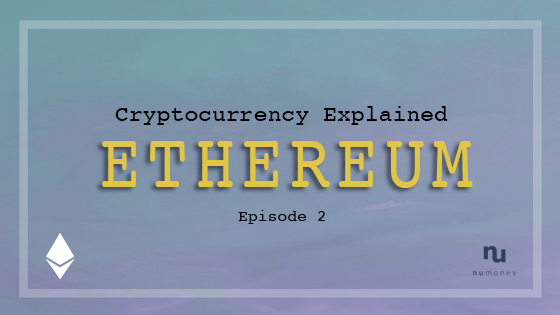 Ethereum is an open-source public service that uses blockchain technology to facilitate smart contracts and cryptocurrency trading securely without a third party. Imagine you want to rent a chalet from a service that uses Ethereum. A smart contract is generated, informing you that after sending the required amount of funds, the service will then send you a digital key for your chalet. As it is carried out in the blockchain, everyone on the network can see that you sent Ethereum and likewise, that the service has sent you the key to the chalet.

As everything that goes on in the network in real-time, when a transaction goes through, a copy of it is distributed through the whole network. If someone were to try and alter the details of the contract, every copy in the network would take note of it. This makes buying a service or rental through Ethereum secure.

Overall, Ethereum is a programmatic platform that can be utilised to build and develop applications via its own currency. As compared to Bitcoin, Bitcoin is created as an alternative to your regular money and is a medium of payment transactions and store of value.

Ethereum is started by one person, Vitalik Buterin, who is a Russian-Canadian programmer and began developing Ethereum at the age of 19. Buterin was expecting many people to point out where he was wrong when he formally announced Ethereum in a Bitcoin conference in Miami but unexpectedly a lot of people was supportive of his idea and this kickstarted the momentum of his project.

A crowdsale eventually funded it in July 2014 and this was the first ever initial coin offering (ICO). Ethereum was further developed as there were many questions regarding the security and scalability. In 2016, $50 million of Ether was stolen by an anonymous hacker, which resulted eventually caused a split within Ethereum community. This split resulted in two blockchains: Ethereum and Ethereum Classic.

Despite that, Ethereum currency has grown more than 13,000 percent in 2017. It is speculated that Ethereum’s aggressive growth might soon overtake Bitcoin in usage.

There you have it, Ethereum explained in under 5mins. As always, before deciding to invest in anything, do research more before finalising your decision.